My Instruments of Writing

September 29, 2019
I'm probably not going to be able to do four posts per weekend in the future, but since this blog is just starting out and I've hit a bit of a blocker in my novel, I might as well give the content here a jump-start.

So, what's my writing setup like? Well, I'll start with some pictures and then explain what's going on. Here's a picture of my desk: 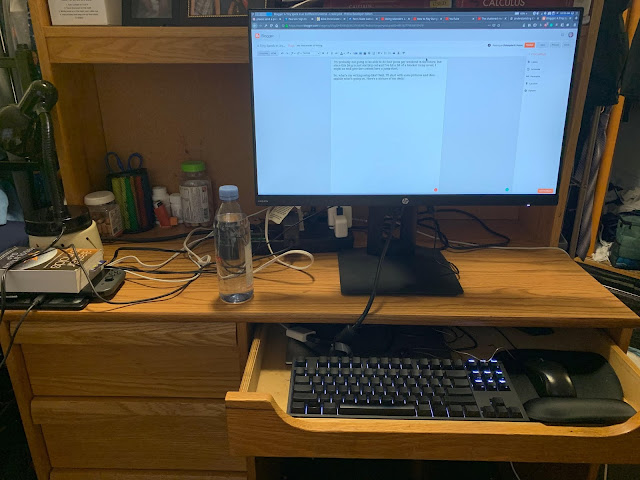 I've got a Cherry MX Clear CODE keyboard, a cheap mouse that barely works, a nice 25" 1080p monitor and a pile of wires like spaghetti. This desk came with the dorm room, and overall its pretty nice, except for one thing: there's no way to do wire management. That's a problem which I haven't really figured out how to solve; I've just slapped a power strip behind my monitor and run everything from there. It looks ugly as all hell, but it works well enough. They won't let me drill holes in the desk...

Next, comes the more complicated bit: 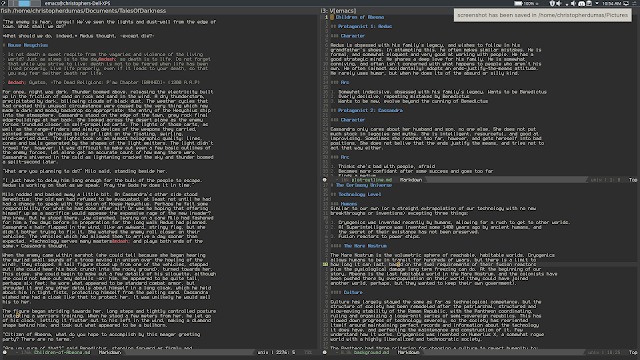 This is my writing setup for my short stories, books, and essays for school. I'm running Manjaro Linux, with a KDE and i3 combined so that I get the benefits of KDE's support and software suite, and i3's truly amazing window management. The editor I use is Spacemacs, mostly because I'm intimately familiar with how it works from using it to program, so I'm very efficient with setting it up and with the keybindings (I use it with Evil Mode for VI keybindings). I also use the X11 Terminus font, because it looks really nice on a 1080p screen, and using mono-spaced fonts makes it easier for me to edit things, and makes the text seem less fixed and more fluid and consistently navigable.

So how do I get formatting when I use Spacemacs? As you can see from the syntax highlighting in the screenshot above, I'm using a plain-text formatting syntax called Markdown. Essentially, it lets you use really simple symbols, that people already use to show *italics* and **bold**, for instance, and render them to PDFs, Word Documents, HTML, or anything else you might think of. It's really convenient to be able to focus on just writing, and use simple formatting without even having to type key-commands, and then be able to render it to any format you please! Even better, I often get distracted from writing by messing with the format or font, but with this method I physically can't do that unless I leave the editor and start writing Latex or CSS, so it helps me focus.

Also, its very nice having my plot and background file open to the side in a split-screen like this, using the window management commands from Spacemacs, including fuzzy file searching, to quickly switch between things I need to look at.

I also save all my work to GitHub, which works as a nice backup system that I have control over, and allows me to get suggested edits and such. I have it set to private right now, so only people I approve can view and suggest edits. If you want to be able to view the novel as I write using this method, email me and I'll consider it. You'll need a GitHub account.

So, what do the renderings look like? Well, the HTML ones are basically just structure, no style (although I could embed a stylesheet in the document itself) so the two short stories that I've posted on this blog so far are rendered to HTML from their Markdown forms, and then copied into the HTML tab on Blogger. I also have two PDF options set up, using different Latex templates. The first is a "manuscript", which uses the official formatting that publishers expect. That looks like this: 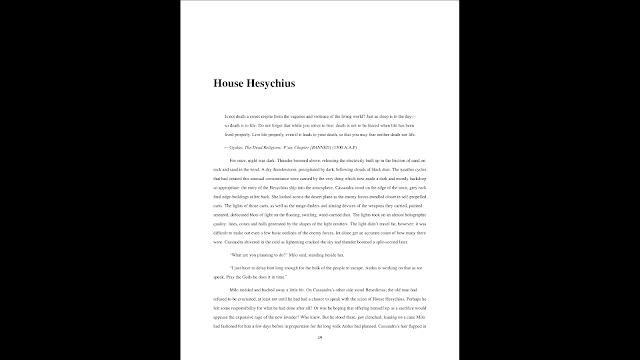 I also have a special export version for myself to read, when I'm rereading the novel to see if I want to change anything, or to remind myself of what happened several chapters ago. It's also the format I'd use if I decided to go the self-publishing route: 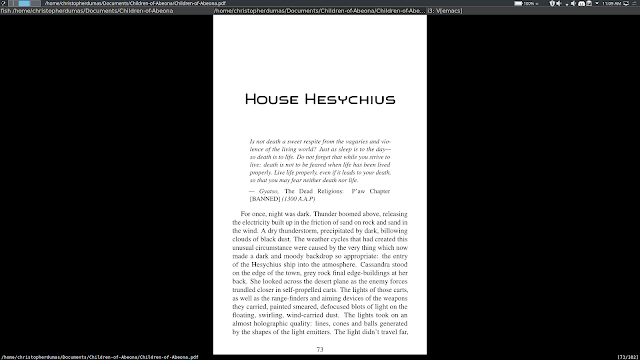 Well, that's pretty much it. That's what my writing setup looks like. It works really well for me, helping me focus and adding a lot of efficiency and convenience to the process. Hope this was an interesting read, and I'll probably make my next post next weekend.

Themes in Children of Abeona: Power

May 24, 2020
This post is the first of a new series I'm planning, which I'm tentatively calling "Themes in Children of Abeona ." As each post comes out, it'll be available under the tag "themes-in-coa" in the sidebar, and I'll go back through when it's complete and create a table of contents to add to each post for easier navigation. The raison d'etre for this series is fourfold: first, I want to make this blog less esoteric, which means that I need to start writing about what I'm writing instead of just how that writing is going. Second, I want to make this blog of more general interest — meaning that instead of just talking about details specific to my book, I need to cover things both related to my book and of more nonspecific interest: if I only cover details about the plot or setting, it might make some readers interested, or entertain those already interested, but it won't draw anyone in from search results. Third, I'm going to atte
Read more

Part I: The Little Black Book To those who have heard the story which I am about to relate to you, I have surely seemed quite firmly insane; and it is for this reason that I am so reluctant to describe the events which came to pass in those few weeks—several years ago—when I first saw that blasphemous doom-herald which, even now, I fancy I can see creeping across the blackness of space above. Even mentioning it, I shiver in the unnatural cold which seems to haunt me in these later years. But forgive me, dear reader, for it is not yet time for those speculations about what remains of my experience. It is best that I begin at the apropriate place in my tale—i.e. the beginning. It began the day after my father died—having left me what little money and posessions he had in this world—as I was sifting through his antiquarian collection of books, research notes, and unpublished works. I had known for some time that, after his first few sucesses as a scientific journalist for one of the
Read more

May 19, 2020
This is going to be a bit of a longer post, since I want to write down my thoughts on some important things going forward, as well as give an update. In light of that, I'll break it down into sections, even though that seems kind of silly. Progress Report In my last post, I wrote about some of the problems I was having with syncing up Cassandra's POV with the rest. I suggested a certain solution in that original post, but as I experimented with it, I found a number of minor, as well as some major, problems. First of all, the time window that I had chosen at first — twenty years — was just kind of a weird time frame to work in: first of all because (so I thought at the time), the other POVs would be out of the action for 636 years, so why give specifically twenty years to Cassandra, when most of that would be in stasis anyway, and so on. With this in mind, I switched to twelve years. This was better because that way I could fit in two years of change and real experience, a
Read more